In 2006, Alaska went from offering one of the best retirement systems in the country, to one of the worst. Since that time, NEA-Alaska has been leading an effort to change that. Through informational sessions, trainings, and legislative advocacy, our members are the driving force behind changing the current system and restoring a retirement with dignity for all Alaska public employees.

Saving Our Alaska Retirement (SOAR) is an NEA-Alaska committee dedicated to ensuring Alaska educators have access to a secure retirement after their service to our public schools. In 2006, Alaska abandoned its defined benefit retirement system and put in place a defined contribution system. This change has left all public sector workers hired since then without any guaranteed income in retirement. This fact, coupled with the reality that most Alaska educators do not participate in Social Security, has created a perfect storm of financial insecurity. 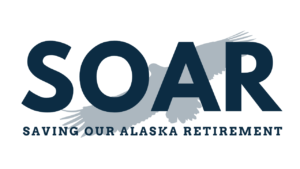 Since 2006, NEA-Alaska has been advocating for a return to a defined benefit system. Our association has supported legislation and built coalitions with other public sector unions to advance our cause. Unfortunately, these efforts have encountered considerable political pushback and have never come to fruition. The SOAR committee is working to change this.

This group shares critical information regarding Alaska retirement plans, financial services available to NEA-Alaska members, and conducts research and analysis of pertinent financial information which is shared with educators and policymakers. SOAR committee members are appointed by the NEA-Alaska President from each of our 7 Regions as well as At-Large members with valuable experience navigating the complex web of retirement issues.

Please use and share this site to gain insight into our ongoing work, increase our capacity to engage legislators, and join our movement to create real change for Alaska working people.

Retirement is a complicated subject with very few one size fits all answers. Whether you’re an early career educator looking for ways to diversify your retirement savings, or you’re nearing the end of your career, there is an abundance of information available to you. Below are some of the most frequently asked questions we hear from Alaska educators.

What retirement plan am I in?

What is the difference between a defined benefit (DB) and a defined contribution (DC) plan?

The primary difference between DB and DC plans is security in retirement. While both plans set aside money for retirement, DB plans guarantee income through a pension. DC plans take money from the state and the employee and invest that money in a plan similar to a 401 (k). Under DC plans, an employee’s earnings are subject to fluctuations in global financial markets and contains no guarantees for income in retirement.

As a public school employee, am I participating in Social Security?

No TRS member in Alaska pays into Social Security. Some PERS members participate in Social Security, some in the Alaska Supplemental Annuity Plan (SBS-AP), and some in neither.

Follow this link to see whether your district offers PERS employees Social Security, SBS, or neither.

What should I be doing to plan for my retirement?
Retirement planning is unique and different for every person. Your tier, savings, other investments, and many other factors should all be considered when planning for retirement. Speaking with a financial planner and utilizing the tools available through the Alaska Division of Retirement and Benefits will maximize your opportunities for success.
How do I get involved in SOAR?
We are actively building a cohort of engaged members who want to get more involved in fixing Alaska’s retirement system. The first step is joining our email list here. Signing up will allow you to receive retirement specific information, notify you of opportunities to testify, and connect you with other educators across the state. If you have interest in joining the SOAR committee, please contact us at info@neaalaska.org.
How do I access my retirement account?

Alaska Division of Retirement and Benefits:

Understanding all of the issues impacting our retirement system can be overwhelming. With local, state, and federal programs overlapping and impacting one another, it’s important to evaluate your individual situation when planning for retirement. The section below will help you assess the overall retirement system for Alaska educators and gain knowledge that can be useful in making informed decisions. As always, working closely with a professional financial planner is the best way to build a plan for your retirement.

GPO/WEP Penalty
The Government Pension Offset and Windfall Elimination Provision (GPO-WEP) are federal rules that could potentially affect PERS and TRS members that are not enrolled in Social Security through their PERS/TRS employer. GPO-WEP can impact your Social Security earnings in retirement. It is recommended that any educator who is not paying into Social Security through their current school district (all TRS members) should develop a basic understanding of GPO-WEP and should make an effort to determine potential implications or how to avoid or reduce penalties.

Political subdivisions of the state—school districts or municipal governments—can join Social Security with a modification to the state of Alaska “Section 218 Master Agreement.” To individually choose whether or not they return to Social Security, a school district can allow TRS employees to hold a “divided vote.”

Click here for more resources on “How does a school district hold a divided vote to allow TRS members to voluntarily rejoin Social Security?”

On July 1, 2006, Senate Bill 241 took effect, creating the Teacher’s Retirement System Tier III (TRS III) and Public Employee Retirement System Tier IV (PERS IV). This action resulted in Alaska moving from a state with a defined benefit pension—one of the better retirements for educators and public employees in the country—to a defined contribution retirement system that is one of the worst retirements in the country.

Fixing the retirement system has been one of NEA-Alaska’s top legislative priorities since Alaska shifted from a defined benefit (DB) plan to a defined contribution (DC) plan in 2006. NEA-Alaska has been one of several public-sector unions advocating for a return to a DB plan. So far, these efforts have been unsuccessful.

In recent years, NEA-Alaska developed and advocated for a “hybrid plan” modeled after other states that have successfully managed pension liabilities and risk, while still offering educators and state employees a pension. Hybrid plans offer both a modest DB retirement coupled with a DC—so employees have both.

ARTICLE: No Social Security? For Alaska teachers, that’s just the way it is

ARTICLE: This is what teacher turnover looks like in Alaska

ARTICLE: Alaska teachers wonder: Should they stay or should they go?

State of Alaska Retirement and Benefits

The Financial Realities of Working as an Educator in Alaska

As a retired member, you can continue to participate in NEA-Alaska at every level. You’ll support Alaska’s premier watchdog on retirement issues, legislation that impacts retirees and TRS/PERS issues. You’ll also add your voice to NEA-Retired, protecting your interests on the federal level.

Still working? Join Pre-Retired for a lifetime of continued support and benefits after you retire. Select a payment plan that works best for you and become a fully paid-up member while you’re still in your earning years.